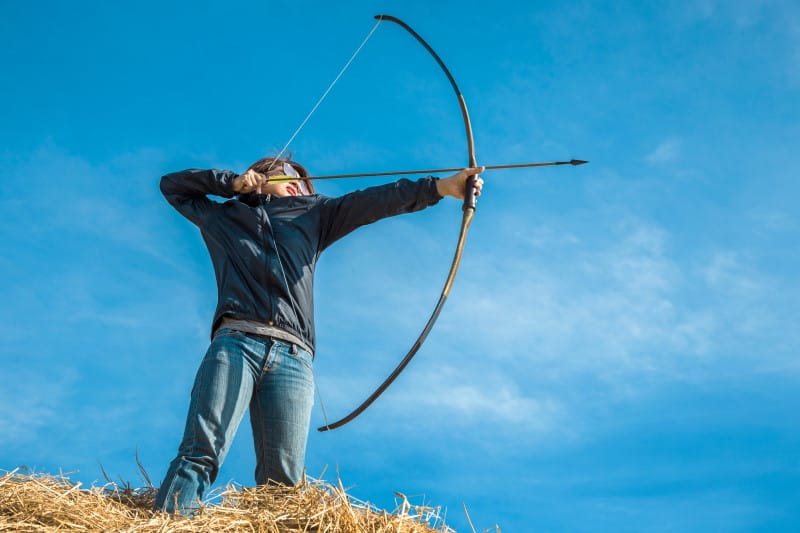 Going into archery, you would probably get a longbow first, then switch to a compound bow. Yet, some romance definitely resides in the longbow. This stick with strings invites something ancient within the archer. However, from the moment you take it into your hands, something happens. You ask yourself, are longbows hard to shoot?

Longbows are harder to shoot than modern bows. They require more technique and more raw feeling from the archer. Usually, they are built without accessories that would be otherwise normal for modern bows to have; it can be quite hard to get around.

To grasp fully why longbows are harder to shoot, let’s take a look at how you can use it, and what it can really do.

When you look at archery, and bows in particular, you can see that there are three different types: longbows, recurve bows, and compound bows. Now, they all have their pros and cons, and here are some of them.

For example, recurve bows are considered the standard bow nowadays. They are swift, great for practice and competition, and can also be used for hunting. Their best trait is their quickness, and how they are easy to use. However, they don’t have much draw power.

In other words, the recurve bow may come with problems as you progress with your technique and increase your draw power. If you want to get even more technical and better at archery, you will likely opt to use a compound bow.

The compound bow is a totally different beast, since it’s the most advanced of all the bows in existence. It has a special mechanism that enhances your ability to shoot. It gives you more draw power, thus it allows for a stronger shot that travels more and has more strength.

Its main disadvantage is that it may be too complicated for a beginner to shoot. It takes more technique and knowledge to actually wield. However, it’s still too far from the longbow, which, by far, is the hardest bow to actually use.

The longbow is quite different from a recurve and a compound bow, which lies in its bareness. It doesn’t come with any advantages that either the recurve or compound bow has.

It makes you rely on your technique, first and foremost. However, to not get it wrong, all other bows also require that you have a proper technique. The difference here is that the longbow requires you to have a bit more technique than when shooting with the longbow. 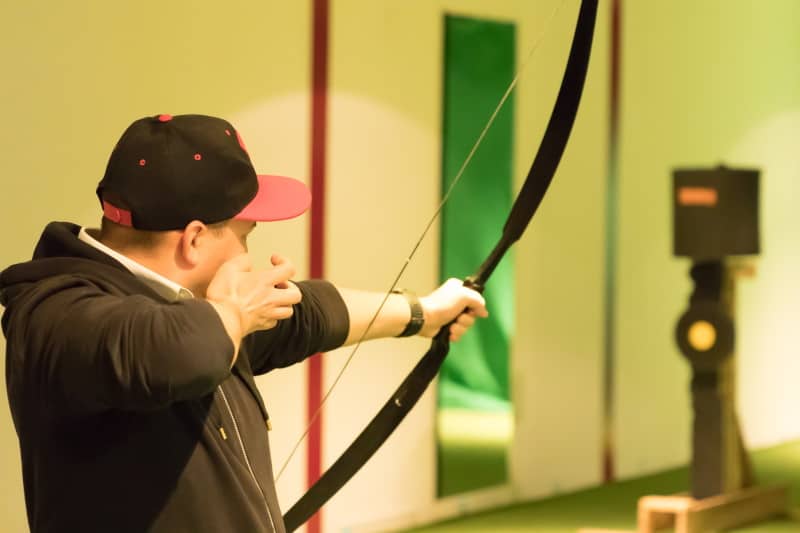 Practicing with a longbow can be a great thing, especially for an archer who looks to improve their skills to another level. For example, a longbow doesn’t come with any extension for accuracy.

In other words, doing so will help you a whole lot with getting that sense of real archery. Likewise, such is also why longbows are looked upon with a sense of doubt in the archery community; they separate those who believe you are supposed to shoot without any help from those who use the equipment.

However, if you want to try one of these wonderful bows out for yourself, you can go with one that has lots of positive reviews, like this.

However, using longbows just doesn’t quite work out with the dynamic of today’s competitions. In today’s competitive setting, using equipment is completely normal; for example, the use of stabilizers to help balance out one’s shot.

If you aren’t using them, for most archers, it will become much harder to place one’s shot. They are so used to using different forms of equipment that they can’t imagine shooting anything without it. For some in the archery community, that’s completely normal, though for others, not so much.

That’s why the longbow feels so authentic. You can’t really use it for competitions since most designs don’t have any slots for equipment. The usual bow for competition has to have a slot for stabilizers, sights, and even a scope, so, without the normal equipment, shooting a bow would feel almost impossible.

In essence, using a longbow for competitions is a bit unorthodox. It doesn’t feel quite right in today’s climate; although, it isn’t exactly impossible, it’s a bit eccentric. To satisfy any curiosity you may have, here is a video from 2017 shows of longbows being used in competitions:

There is another use for the longbow. The longbow gives an almost unparalleled feeling when hunting. Even without extensions and equipment, it fulfills the very basics you would need when hunting.

Only when you are hunting will they come full circle and complete their true meaning. They have been used for centuries for both hunting and war and, here, in the deepest depths of the woods where there’s nothing but nature and yourself, they feel even more true.

When you are out there in the wild and searching for the prey with your longbow in your hands, such is the time when you will find the longbow’s true calling. When you think about it, it ain’t hard to tell why longbows are so great.

If you are surviving or prepping hard, the longbow becomes an even more obvious choice. It doesn’t have any equipment attached to it. Actually, it’s just a bow that you will use to hunt animals.

That is the highest moment, and also the longbow’s highest purpose. When you come down to that moment in which you are standing against nature itself and finding the right shot with nothing besides your skills and senses, you will feel more alive than you ever did throughout your entire life.

Therefore, the only thing that is left is to learn what conditions are great when shooting a longbow, and what truly kills it. After all, even though it may not look as exotic as the other two on the list, it’s the supreme confirmation of your skills and your ability as an archer. 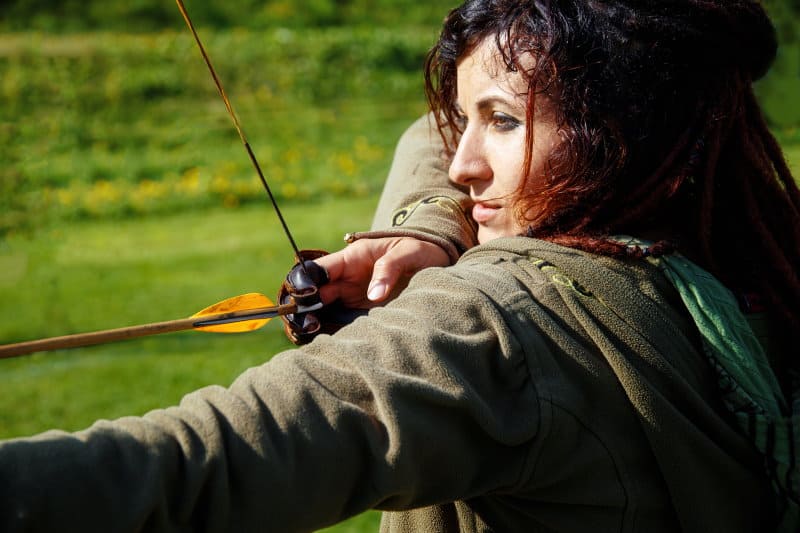 When you are hunting with a longbow, you want to have an adequate technique and enough draw power. You also want to be able to hunt and track the prey effectively, no matter where the prey is located. In the end, it all comes down to the point of whether you can or can’t make the shot with a longbow that will take the prey down.

So, when you are shooting the longbow, you want to heighten all of your senses and give in to the power that beckons you. When using a longbow, you are connected to the thing most primal in all archers, which is the spirit of archery itself.

Now, you don’t necessarily need any complex equipment to help you to shoot. In this case, you are using only your senses to help guide yourself toward the target. There’s nothing more special.

In the end, it takes much more skill to hunt and shoot a longbow than it takes to hunt with either a recurve or compound bow. So, the longbow should be the final test when checking what you can accomplish as an archer.

Even though it may feel strange to shoot without additional equipment, you shouldn’t waver. On the contrary, it should help you feel much better about yourself when hunting the way the people of the old used to hunt.

It’s actually bringing you closer to what archery used to be and what it should really be. So, feel free to practice and run in the woods with the longbow as much as you like. It’s only going to bring your skills to another level.

Remember that the arrow you shoot makes a major difference in how well your accuracy is. Check out more about this in our post on Do longer Arrows Fly Faster.

Finally, it all comes down to relentless practice. Without it, you can’t achieve anything, regardless of the bow you are using. In fact, if a longbow can teach you anything, it’s that the technique is supreme over any equipment, any day of the week.

So, make sure you practice a lot, work on your technique as much as you can, and try giving the longbow a chance. Even though it can be really hard to shoot, it will give you everything you need to become a master archer in the end

If mastering the art isn’t the point of the art itself, then such art is being misused. Seek mastery, and you’ll find your true self.