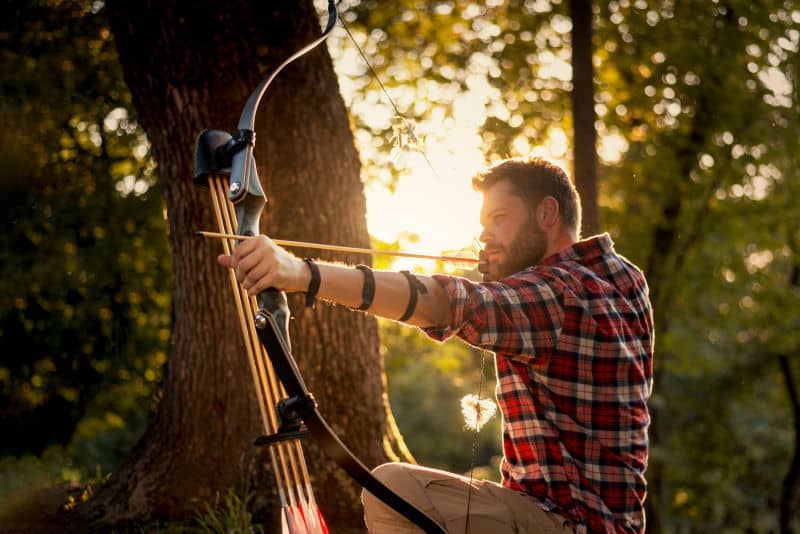 There’s not a single archer in existence who never—at least once—wondered about this subject: how far can a bow or recurve bow shot? Instantly, you can remember various movies featuring archers and their unbelievable feats, yet the truth is somewhat different.

That’s it if you consider several factors. But, before we look more into that, we should take a look at an ideal scenario.

First, you will want to look at this problem theoretically. In theory, a lot is possible, but we will want to stay confined within some parameters of shooting. So, let’s say that precision is an important factor of this test.

If precision isn’t that important to you, you could say that it’s possible to shoot at lengths greater than 1000 yards. When using different angles, you can shoot up and reach a great height, after which the arrow would fall down to the ground, many yards away.

Also, you may want to think about how the environment that day would have to have the best possible conditions for shooting. Conditions to consider include no wind, humidity, rain, and other troublesome conditions.

However, that kind of theory isn’t necessarily appropriate for tournament shooting or hunting, thus precision must be viewed as an important factor. Aside from that, you will want to think that the archer has great form and strength to get the most out of the shot.

Then, hitting a target, even a moving one, is possible at a length of 200 yards. However, things aren’t always in practice as they are in theory. In reality, there are many problems that archers will meet when shooting their bow.

Check out this video to see what some great shots by an expert archer looks like in action to see what an ideal situation looks like:

The Type of the Bow

Even though all bows look similar, there are differences between them, and even though there are categories like longbow, compound bow, or a recurve bow, not all bows within the same category will be the same.

Even within the same type or category of bows, there are differences in construction, weight, durability, draw strength, and so on. Therefore, the type of bow will dictate how far you can shoot with it.

Some bows aren’t made for long-distance shooting and, even beyond that, some bows can’t produce enough strength to achieve the distance in the first place. Additionally, some bows are built to shoot at greater distances.

The main problem with the recurve bows is that it isn’t meant to shoot at long distances. It is meant for quick and sharp shooting at lesser distances, for people with medium level strength. The main features of these bows are drawn out with people who perfected their form.

Therefore, the very problem with this type of bow is that it isn’t meant to fulfill long-distance shooting in the first place. Yet, the strength can be subsided with another thing, which is the angle of the shot.

If you don’t have a recurve bow yet then you’re going to want one that is high quality. Check out Bear Archery’s Grizzly Recurve bow for a perfect shot. 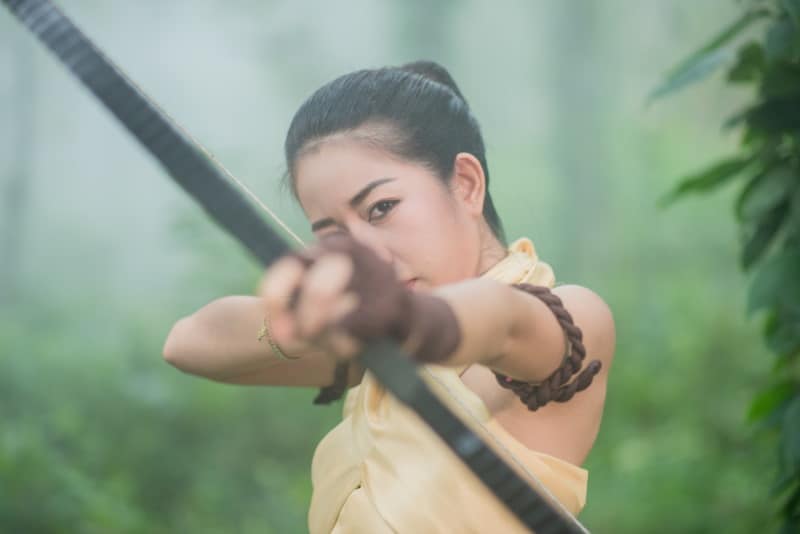 The Angle of the Shot

This is another important factor. The angle at which you shoot will determine how far the arrow will travel. In most instances, you won’t want to shoot at big angles, since you won’t be trying to hit something too far away from you.

However, in the past, this was the practice in which bows were a part of the standard combat arsenal, thus hitting the enemy forces from 300-400 yards was normal. It was possible to shoot at even greater distances, but without real precision.

That’s why it was normal that a bunch of archers—often an entire platoon—would get shot at once. As they release their shots, the sky would be covered with dozens of arrows, blocking out the sun. The precision wasn’t as important because they didn’t try to hit a single target in the first place. Instead, their goal was to do as much damage as possible. Today’s archery is a completely different practice.

Today, all tournament shots are done in a direct 90° angle. There’s no need to change that angle, since the tournament target is always at the same distance and requires shooting at the same angle.

Therefore, only hunting is left, but today’s archers always aim to find the target and eliminate it ethically. They thought it in such a way that the animal would after the first shot and not continue suffering afterward.

However, whether an archer can do any of this depends on another really important factor, which is the draw power or power to produce a certain shot.

When it comes to the length of the shot, drawing power is the single most important factor in archery. Even if you have a bow of less quality, it would still be possible to shoot an arrow at a longer distance than if you had a proper bow with less draw power.

Draw power consists of two factors: the first is the actual physical strength of the shooter, and second is the form or technique of the archer. Just to make it clear, strength cannot be a substitute for actual technique.

It’s a staple that works for all martial arts alike. An archer that has a lot of strength but a weak technique will be unable to shoot at long distances and with good accuracy. All that strength has no use if it isn’t channeled properly.

Yet, a smaller archer with a proper technique can achieve both distance and accuracy. The shot may lack the initial power, but it would fulfill its original purpose, which is to hit the target at a distance.

So, it’s best to have both strength and technique. Once you have that, you can achieve that long-distance shot, keep the accuracy, and still pierce the target. Regardless of anything else, it’s possible to shoot at maximal distance with proper technique and strength.

All that may be hindered, however, in an area where you choose to shoot.

You can learn more about how draw power works in this article where we explore the differences between compound bows and crossbows. 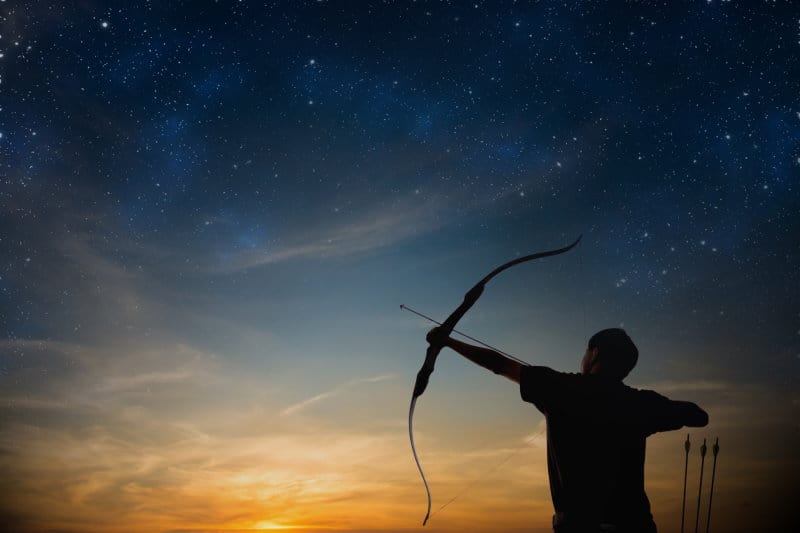 The environment dictates the conditions for the archer. Aside from the tournaments, where you can have an indoor controlled environment, you can accept problems. Now, that doesn’t mean that you can’t shoot your bow—it just means that it will be troublesome.

Depending on your environment, you can expect different climates and, therefore, different situations. It can be everything from humidity, mist, temperature, rain, dryness, or simply wind that will interrupt your way with the bow.

You should also consider that these conditions will be very important factors when shooting your bow. For example, wind will greatly influence the abilities and outcome of a young archer’s shot, and their inexperience will likely lead them to miss.

However, if you are shooting in a controlled environment, then the environment itself won’t be as significant a factor. In that situation, shooting your bow would fall directly on your ability as an archer.

Thus, an archer has multiple benefits if they hunt on a terrain they know well. When experienced hunting on a certain terrain, they will have little trouble adapting to the environment.

Therefore, the entire situation depends on your ability to practice precision, no matter what. Such is the most important skill an archer may have.

It falls down to this simple ability. If the archer has mastered precision, they can literally shoot almost anything, regardless of all other factors. That is why constant practice is the most important thing an archer can do to shoot at a great distance.

It’s all really quite simple; when an amateur archer shoots the target at a distance, they won’t know to calculate all factors into the shot. For them, it’s impossible to hit the target simply because they don’t know how to aim properly.

A senior archer will know how to calculate all these things and perfect that shot to hit on longer distances. After a while, an archer will recognize how to measure the distance, and they will also be able to put all other factors into consideration when performing an effective shot.

Without this ability—which relies more on experience than on other factors—you won’t be able to shoot at a longer distance, regardless of anything else included. Thus, it all comes down to whether you practiced enough.

If you haven’t practiced enough, then it’s the perfect time to visit a shooting range and hit those hay bales.

As stated, it really all comes down to practice. The more you practice, the better you’ll be able to shoot an arrow. Then, you should remember to forge all aspects of your archery equally. It doesn’t necessarily matter how strong one aspect is if all others are lacking.

So, keep increasing your strength and technique and, most of all, study the recurve bow. Once you learn everything about it, you won’t be able to miss. It holds all the secrets to the mastery of archery. Learn them, and you’ll be the archer you always wanted to be.

No target will be too far for you!