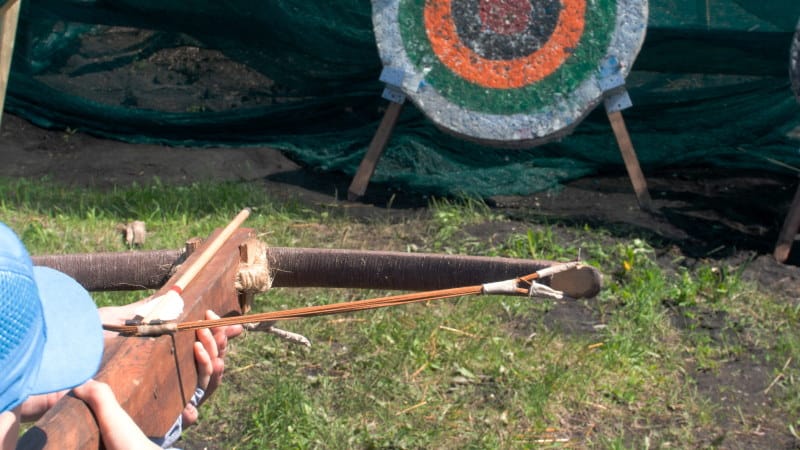 Nothing beats grabbing the crossbow and heading out to the range to shoot some targets. But there’s equally nothing more frustrating than having your shots constantly hitting to the left or right of your target. Just what exactly is happening here?

There are several reasons why a crossbow could be shooting to the left instead of straight towards the target you have lined up. One of the common problems is poor cocking practices. Another issue that occurs often is that your crossbow is improperly tuned. Poor shooting practices may be in effect, but, more likely, the shot hasn’t been lined up correctly in the first place.

To learn more about how to fix a crossbow that is shooting to the left, continue reading. If you are having a similar problem, but the bolt is shooting too high, then check out this article.

Diagnosing and Fixing a Crossbow That Shoots to the Left

If your crossbow is shooting to the left, then there are several issues that can be wrong, as mentioned above. You should commit to checking each of these issues to discover where your problem is. A crossbow won’t tell you exactly what the problem is directly, so you will have to detect it yourself.

Since one of the most common issues is that the crossbow hasn’t been tuned properly, let’s start there. The tiller of your crossbow is the balance between the crossbow’s limbs. This should be identical in both weight and the pull length, both of which can be learned more about here.

If there is an issue with the tiller, then you will have your bolts creating impact points to the left or the right of the target. This tells you that the balance between the limbs is off. You will need to measure the limbs from where they meet the prod to the string. Both limbs should have the same measurement. If the measurement is off, then you should be able to fix it by looking for an adjustment bolt on each limb. This adjustment will need an archery wrench, so grab yourself a pocket-sized one like this for adjustments on the fly. 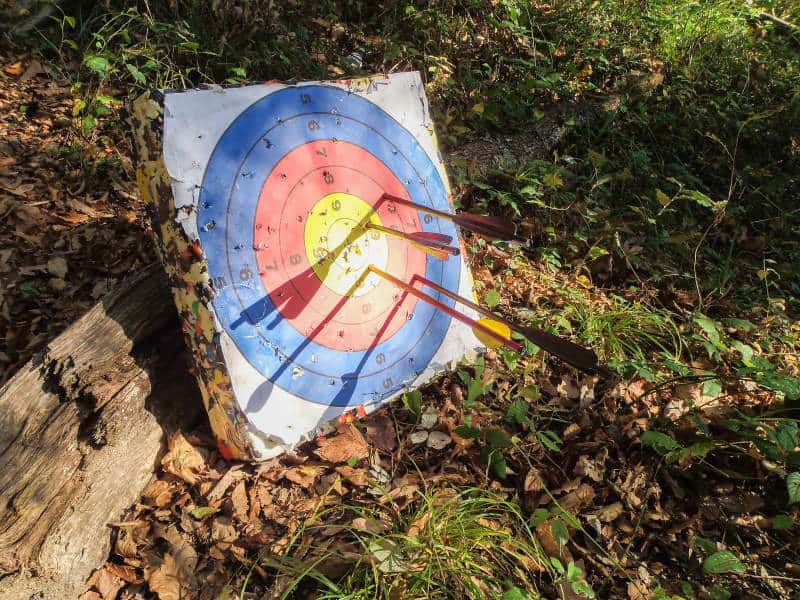 If you want your crossbow to hit the target you’re aiming at, then you need to make sure the bow is fully cocked and that it locks into the same position. The serving should be centered with an equal length of railing on either side. Depending on which way the serving is off, you will have a bolt that impacts too far to the left or too far to the right. How far off the impact point is from the target will depend on the distance from which you’re shooting.

To fix a problem with poor cocking practices, you should take a marker and make a little note of where the serving is on either side of the rail while the string is left in its proper position. As you cock your crossbow, you can use these marks as a guideline for where the serving is meant to be. This will help you improve your cocking practice as a beginner. With enough experience under your belt, you’ll find that you can tell immediately if a crossbow is cocked properly with just a glance; although, in the beginning, help is always a plus.

Another issue that could lead to a crossbow shooting to the left is a crossbow that isn’t being supported properly. When you’re about to take a shot, you need to line up the crossbow so it’s horizontal with the ground. If your crossbow isn’t level with the ground, then you’ll have an accuracy problem.

A crossbow that has its left limb lower than its right will shoot off to the left. Likewise, if the right limb is lower than the left, you will have a bolt that impacts to the right of your target. This is the easiest of the issues to fix. Simply take an extra second or two when aiming and make sure that your crossbow is level. If you need to see this in action visually, then check out this detailed video on proper crossbow shooting technique:

Sometimes, it can be hard to tell if your crossbow is really shooting properly or not. One way that can help you to figure out what is wrong is to film yourself shooting. Set up a camera to view yourself and the target you are aiming at, then fire. Then, reposition the camera so it’s looking down at the crossbow as you fire. This second angle is a little harder to achieve, but it’s totally worth it.

When you have your footage, go back and watch it closely. You can watch it at full speed like you were when firing the crossbow, but the real advantage with this technique is the ability to slow down the footage. Doing so allows you to see what is happening with your crossbow in real-time; the slowed-down footage makes it so you can see every single frame of action to diagnose your problem.

What Else Can Affect My Shot?

All sorts of things have an impact on your shot. Whether you’re shooting at a range your crossbow is made for is one of the big ones. Shooting too close or too far can greatly impact your accuracy.

A scope that is slightly misaligned will have a major impact. The problem here is that what you line up and where you are shooting are actually two different locations. If you take the scope off, then you would actually have a cleaner shot. If your scope is the problem, then you can fix it by checking its connection to your bow and tightening it up.

Poor shooting practices have ruined many a shot. If you aren’t bracing your crossbow from a sitting position, then you are simply making it more likely that you will miss. As your arms shake, even a little bit, the accuracy of your shot will drop drastically.

Another thing that many beginning archers forget about is the wind itself. Two arrows shot at the same target will pass through the same air space. However, both shots, even from the same location, could be wildly different, depending on environmental factors like wind, rain, and snow. Never forget that the environment you shoot from is as important as the bow and arrow you are shooting with.

How Often Should I Perform Maintenance On My Crossbow?

People have different opinions on this one. Some people think you should maintain your crossbow monthly, whereas others will go long stretches between performing maintenance.

The only guide that should be followed in my opinion is to perform maintenance between every 150 to 200 shots you take. This absolutely must be followed to keep your crossbow in working condition.

Beyond this, I actually like to perform maintenance before and after taking my crossbow out, anytime I do. I think it is also important to check each piece before firing. Once you fire, pay attention to your impact point. Is it where it should be? If so, then you’re good. If it isn’t, then diagnose the problem before moving on.

Is There Anything Else I Should Look For When Performing Maintenance?

I recommend looking for anywhere on your crossbow that you have added a component and anywhere where the two components meet. These locations are prone to suffer from wear and tear.

The stronger your crossbow is, the heavier the draw weight it is likely using. As the weight of your draw weight increases, so too does the amount of vibration that passes through the crossbow every time you shoot it. These vibrations will have a negative effect on the structural integrity of your crossbow, so you should check where the components meet and make sure to tighten them up wherever they are loose.

A crossbow is made up of many different parts, some of which need to stay tight and in place, like your scope. However, other parts need to move fluidly. For example, when you pull the trigger, you want your bolt to launch, don’t you? Yeah, of course you do, that’s pretty much the whole point of crossbows.

But, if the places that are supposed to move are sticking, then you likely won’t have much luck. You’ll find your shots are weaker than they should be. So, when preparing your crossbow, whether for hunting or target practice, make sure you check that everything is on securely and moving the way it is supposed to.

Keeping your crossbow in perfect shooting condition is the responsibility of every crossbow archer. Whether your crossbow is shooting to the left is a sign of a possible problem. Make sure that you walk through each of the problems when diagnosing your issue.

If you maintain your crossbow at regular intervals, then you’ll find that you deal with fewer issues. This will result in a much more enjoyable shooting experience, and I hope that you’ll use this advice to maximize the pleasure that archery provides you.