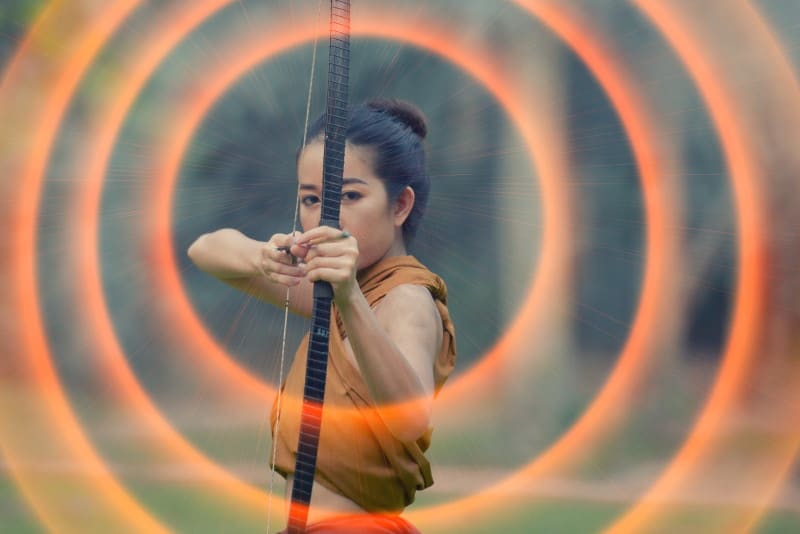 How much do you know about the flight of an arrow? Do you know if the arrow just launches forward in a straight line, or does it spin in flight? How about the archer’s paradox? If you don’t know the answers to any of these questions, then you have a lot left to learn about the physics of archery.

The archer’s paradox is quite a fascinating physics problem. When an arrow is released to the right of a bow, it follows a trajectory different from what would be expected. This paradox is possible because of the way arrows spin in flight. The force of a released bowstring pushes the arrow forward from the rear and starts the arrow wobbling. As the arrow continues its forward momentum, its fletchings interact with the air and work to steer the arrow toward its intended target. This steering comes in the form of spin, thus we can say that arrows do spin in flight.

To learn more about the physics behind the archer’s paradox, continue reading. We’ll cover this topic and more in the article to come.

The Physics of Archery

To understand the physics behind archery, let’s look at each step of the archer’s paradox and what happens whenever you let go of the bowstring. Keep in mind that the size of your arrow, fletchings on it, and its length will all directly affect how much the arrow will spin and how it will travel in the air. We talked more about these topics here:

As the archer, you would nock your arrow and draw back the bowstring, lining up your target. If you have the right length arrow, complete with the proper fletching and a total weight that supports it, then you will line up your shot and hit the target. However, the reason that you can hit the target at all is thanks to the archer’s paradox.

The paradox in archery is how your arrow should be going a different direction than it actually does. If an arrow was calculated as a rigid piece of wood, then it would strike off to the side of where you were aiming. But this isn’t what happens—the archer selects their target, then fires and hits it. So, how is this achieved? To answer this question, we will need to let that arrow loose.

As you let go of the bowstring, it would slide off your fingers and move toward the left. As the fingers open and let go of the string, it also lets go of the tension necessary to hold the bowstring in place completely, so it starts to fall off your fingers at an angle toward the center of the bow. This causes the string to move to the side rather than straight forward. An archer cannot move their fingers fast enough to prevent this sideways motion (however, it should be noted that a crossbow doesn’t really experience this in the same way).

As the bowstring comes in from the side, it causes the arrow to start vibrating. Whether the string has gone to the left or right will determine which direction the arrow begins to vibrate. This is the wobbling of the arrow that we’ve talked about in other Archery Guidance articles. The force from the bowstring coming forward will eventually launch the arrow away from the bow. This happens so quickly that you will need a high-speed camera to catch it properly on film. 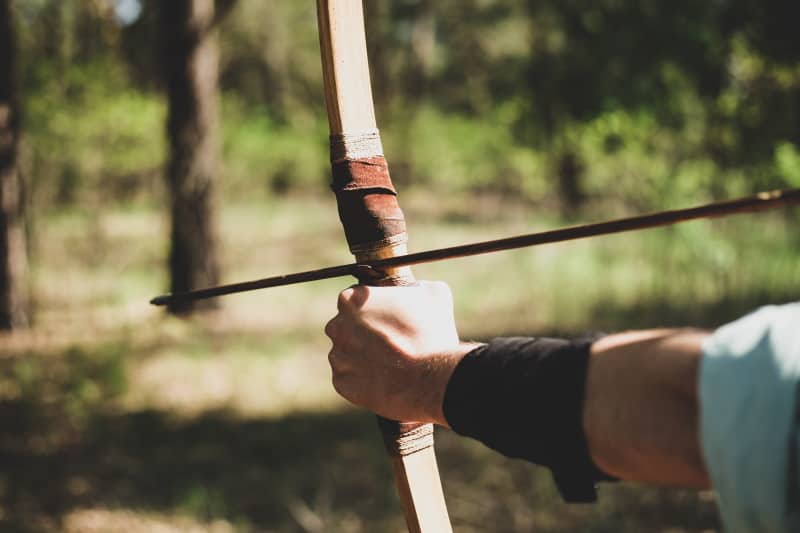 As the arrow travels about halfway past the bow, the string starts to move back in the opposite direction of where it was going before. In other words, if it first moved to the left as it was sliding off the fingers, then it will begin to move back to its resting position by moving to the right. By this point, the arrow has still not fully left the bowstring yet, so it is wobbling both directions. This is extremely important to note; if the bowstring only pushes at the arrow from the left, then it could never be aimed accurately. However, because it ends up pushed by both directions, it can.

As the arrow is leaving the bow completely, it has completed its first full wobble. It is extremely important that the spine rating of the arrow is right for the weight of the arrow. If the spine is too thick, then it won’t wobble properly, and it will go off target. If it is too thin, then it can wobble too much and fail to fly properly.

When an arrow is spinning, it’s creating a force to act against the force that is trying to pull it off target. This spin helps increase the speed of the arrow, but it is most important in how it helps straighten the arrow out.

So, as you fire your bow, you will find that the bow moves the arrow in one direction, then the next direction, which starts it lining up for the shot you aimed. The arrow leaves the bow with a certain amount of force on it, and the fletching then interacts with this force to cause the spin.

Do Crossbows Deal With the Archer’s Paradox?

They do, yes, in a technical sense. However, a crossbow has far less of an impact from the archer’s paradox when compared to vertical bows. Crossbows take the arrow out of your hand and release it at a much greater speed than you ever could with a vertical bow.

If you were to capture a crossbow launching a bolt on a slow motion camera, then you would see that the bolt actually does wobble as it is being launched, but it happens so quickly that it is hard to see with the naked eye, and it lines itself up much quicker than a bow-launched arrow does.

How to Test Your Arrow’s Spine Rating

We covered this topic in depth in this article, so head on over there to learn more about this topic in detail. Since the spine rating of your arrow is so important to making the perfect shot, it is also crucial that you make sure you use the right arrows.

To do this, you’ll want to get yourself an arrow inspector like this one from HOMELEX. This easy-to-use tool lets you check your arrow’s spine rating to make sure you aren’t shooting arrows that are too thick or too thin, as these factors could mess up the physics of your shot and result in less accuracy.

So there you have it, the reason that an arrow spins in flight is because of the forces that are being worked against it as it leaves the bow. The bowstring shakes the arrow in one direction, then the other, causing it to wobble.

The wobbling of the arrow is what allows it to stay on its path. If it didn’t wobble, then it will go wildly off target. This happens when the arrow is too stiff. However, a properly sized arrow will fly perfectly because of the way the fletching allows it to spin.

If you want to see this in action, then set up a camera and film yourself firing your bow.