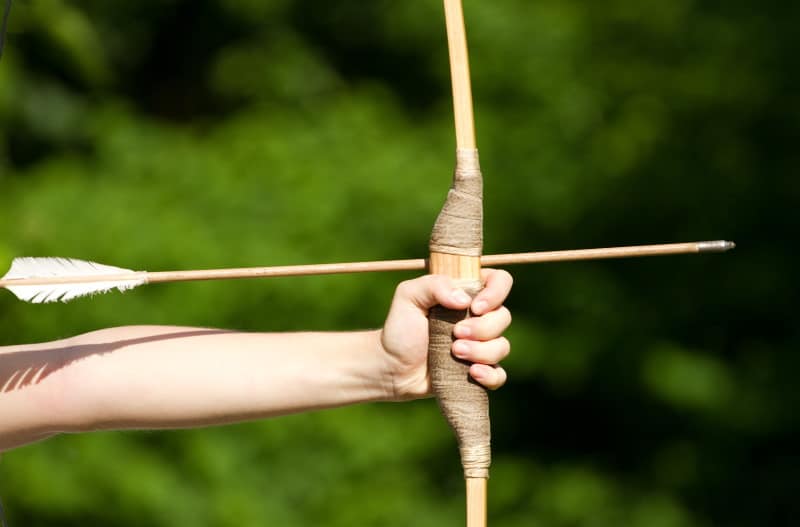 Arrows are meant to do one thing: fly at a target and pierce it with their pointy bit. Since the pointy bit is pretty important to this equation, it would make sense why it is there. But what about those feathers on the back end? What are they doing to help the arrow?

The feathers on an arrow are called the fletching. Rather than helping your arrow to fly faster, they actually slow down the flight of the arrow. If you shoot your arrow and it is flying straight, then they cause minor drag or slowdown; however, an arrow that isn’t flying straight will experience a lot of drag from the fletching. As an arrow turns in flight, and the fletching offers resistance. This resistance is in the opposite direction of the turn, so it works to keep the arrow on target.

The feathers on your arrows don’t make them fly faster, but they do make them fly more accurately. There are a handful of variables that help to determine how effective your fletching is for your intended purpose. To understand the role of fletching, along with the different kinds available, stick around and read ahead!

When an arrow is shot from the bow, there is a wobble to the arrow. This happens no matter what, as the bowstring is released and it wobbles. This is then transferred to the arrow. Depending on how the arrow is designed, it will either straighten out as it flies, or it will start to veer off target.

There are many reasons that an arrow or a bolt may veer off target, which we’ve discussed here:

Another reason that your arrow may be veering off course is because the spine is not the right size, which we’ve also looked at in depth here.

However, another reason to add to that list is that it lacks fletching or it has fletching that isn’t right for the size and goal of the arrow. Getting the fletching right is key.

When you shoot an arrow, it should fly in a straight line. This may seem pretty basic, but the reality is that, oftentimes, it doesn’t. You may find that your arrow veers, as mentioned, but it could even go so far off target as to start spinning around mid-flight, as if it were a baton being twirled.

This happens because of how the arrow cuts through the air and the force that that air has on it. Air resistance causes the arrow to go off target in the same way that air resistance would bring down planes if they were designed any differently.

The fletching, or feathers, on an arrow can almost be thought of as the wings of a plane. A plane would be faster without the wings, but it wouldn’t be able to fly and keep its balance. 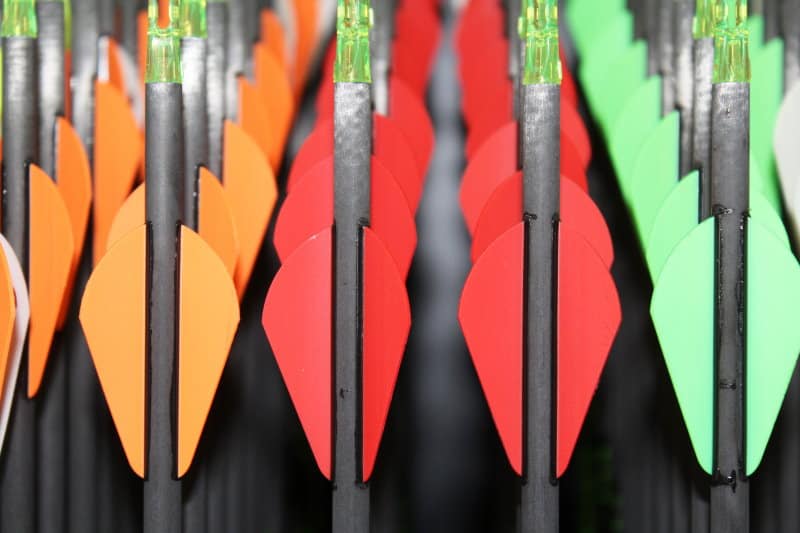 As the air resistance pushes on the arrow, it will want to veer. However, the fletching creates a push in the opposite direction. This basically means that the fletching on the arrow pushes back against the wind, allowing the arrow to fly straight.

There are certain elements of the fletching that will affect how it works, and the degree of turn you apply to your fletching is one such element. A slight turn in the vane creates more spin, for example. Fletching with a twist keeps the arrow straighter when it is rotating. Consider a football throw and the way the ball spins through the air; this is the same thing that the arrow is doing.

Straight fletching creates a faster arrow, but it doesn’t add any spin. These are used for close targets, as wind will be more likely to cause the arrow to veer. An arrow with a twist will have more stability, and thus be better for long shots but with less speed. Depending on whether the fletching is twisted at the top or the bottom will affect this, too.

The length of the fletching and how high off the arrow it is also plays a role. The higher off the arrow the fletching comes, the more contact it will have with the wind, which will equal more stabilization. Larger fletching tends to result in slower arrows, however, so there is a tradeoff to consider between speed and accuracy.

Before you decide which fletching style is right for you, you should try using several different designs to get a handson feeling of how they function. All the theory in the world means nothing until you get a chance to try shooting for yourself.

Are There Other Kinds of Fletching?

There are many different materials that are used for fletching, including various kinds of feathers. The size and shape of fletching also changes. Flu-flu arrows use large feathers. Turkey feathers are a more traditional approach.

Spin wings are vanes that increase the speed of an arrow’s rotation and are quite popular with recursive archers. Vanes are basically the standard fletching used these days. Elven arrows have a unique shape to their vanes. 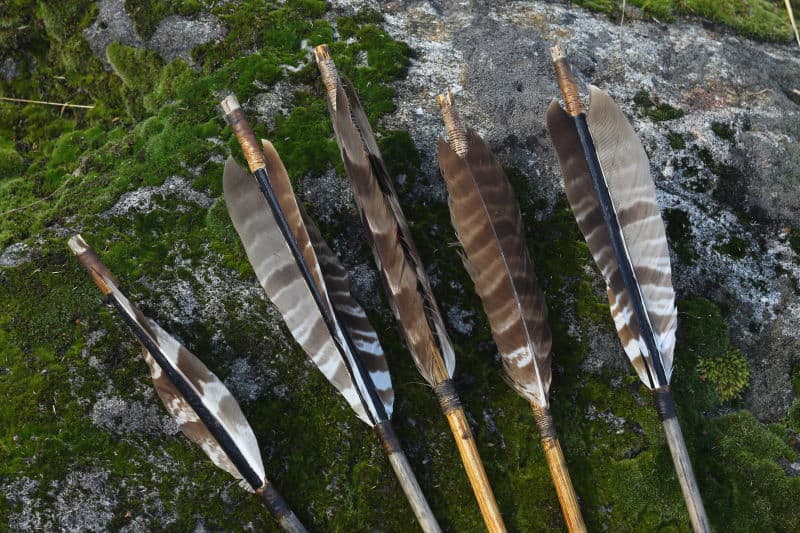 This is a hard question to answer—we don’t actually have any solid grounding of knowledge about the earliest use of the bow. It is believed that the bow dates back to the Stone Age, or 20,000 BCE. However, our earliest knowledge of a people who adapted the bow in a large way is the ancient Egyptians, who used them to hunt in 3,000 BCE.

The artifacts that we have found regarding archery in this time period show us that arrows had fletching at this time. This makes sense when you consider the physics of archery. Fletching may slow down your arrow’s flight, but it is pretty much impossible to hit a target at long distance without fletching.

If we consider the evolution of human weaponry, we can see a parallel between the arrow and the spear. The spear is solid enough to be tossed without any fletching. However, it is limited in range and only able to hit targets that can be reached with upper arm strength. Arrows were invented to hit a target at a longer distance, which can only be achieved through the use of fletching.

Yup, they certainly do. A crossbow takes a lot of the pressure off the archer. Rather than holding back the string and letting loose, they would simply need to pull the trigger, then have the mechanical bow do all the work for them.

In no way does this change the physics of the arrow in flight. It will still shoot poorly and with little accuracy if the bolt is left nude. Modern crossbow bolts are made with three fletching, often made from plastic rather than feathers like traditional arrows would be.

The bolts would not be accurate without this fletching, but it needs to be shaped and sized specifically to work with the mechanical side of the crossbow.

Do I Have to Make My Own Fletching?

Fletching can be made out of plastic vanes or feathers. The size and shape of it will affect your shot, so you should get some hands-on experience shooting arrows with different fletching styles before you try making your own.

You will need to have arrow shafts, a fletching jig, and some fletching glue. All components should be cleaned ahead of time. The shaft is placed into the jig. Glue is set in the crevice that is made by the jig’s clamps.

The vane is placed onto the arrow and left to set before it is removed from the clamp. The arrow is then rotated and the process is repeated until all the vanes have been attached. The arrows are left to sit for a few hours before shooting. To see this process in action, check out this video:

Arrows have feathers for more than just decoration. They play a crucial role in ensuring that your arrow hits the target. If your arrows didn’t have fletching, then they wouldn’t be arrows; they’d be tiny spears you were trying to toss at your targets.

Fletching doesn’t need to be expensive, but it can be customized to a large extent. You can change the size, shape, thickness, and style of your fletching to really personalize your arrows. The choices you make here should be determined by how they affect accuracy rather than their aesthetic appeal.

But, remember that the aesthetic of your fletching can be changed. You can have pink and green fletching, or you can have fletching with designs printed on them. These effects would affect the accuracy, so don’t be afraid to get out there and make your arrows uniquely yours.