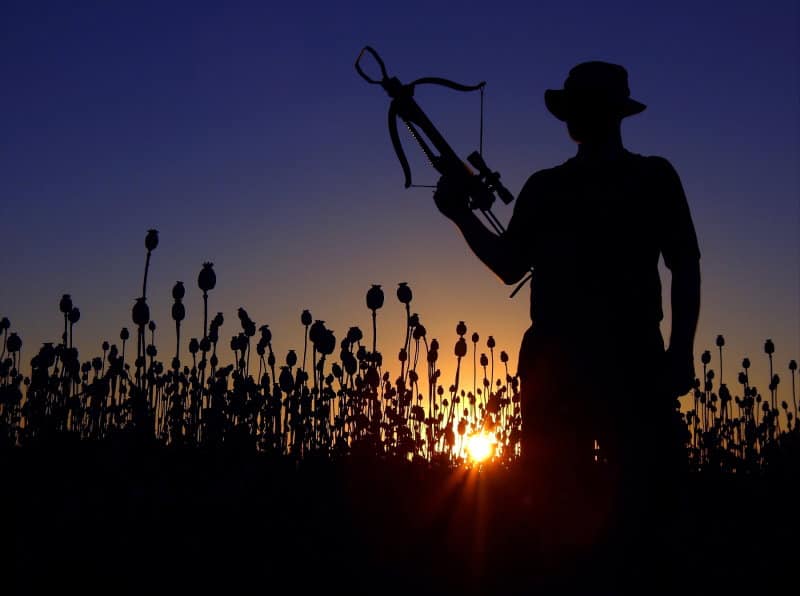 A long time ago, crossbows were used for war—yet, as times were changing, a present-day crossbow became better used for hunting. Hunting still requires you to be constantly aware and present, with your crossbow cocked. That raises the question: how long can you leave a crossbow drawn?

Crossbows can be drawn or cocked for long periods of time. However, archery experts are advising that you don’t leave them drawn for more than a hunting day. Leaving them cocked can lead to strings tearing apart, which can be potentially dangerous to people and objects.

Let’s explain why it works that way, and what its deal is.

The crossbow has a simple shooting system. Basically, there is a string that you pull, which releases the bolt after you pull the trigger. The thing that holds the bolt safely is called the cocking system.

When the crossbow is cocked, it means that it’s ready for you to shoot. This has been the case for crossbows across time. There are additional and advanced accessories that can also improve the crossbow.

However, the safety and cocking system has always remained the same. The concern is whether you can leave the crossbow drawn for a prolonged period. Of course, there aren’t many scenarios in which you would need to keep your crossbow drawn intentionally for days on end.

Still, some hunters and archers are inexperienced and don’t know how to handle a crossbow properly. In these cases and if the user isn’t paying enough attention or care, it could happen either as a mishap or plain carelessness that the archer wouldn’t remember to uncock their crossbow and it fires while they’re asleep.

You should get to know how to handle your crossbow properly and make sure you prevent that from happening. To do that, you need to know how to cock a crossbow as it should be done.

If you don’t have a crossbow yet yourself then you haven’t had a chance to see this shooting system in action. Grab yourself a highly rated one like this to join the fun.

When you have to fire the crossbow, you will have to cock it first. The cocking process is basically when you are putting the bolt into the crossbow, pulling the string, and readying the crossbow for shooting. 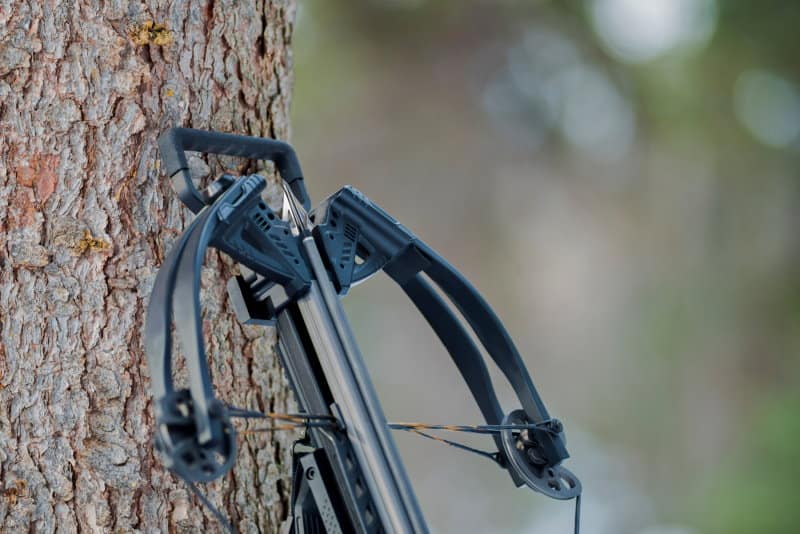 When you have to fire the crossbow, you will have to cock it first. The cocking process is basically when you are putting the bolt into the crossbow, pulling the string, and readying the crossbow for shooting. You can see a video of it here:

The main concern with crossbows is that you must ensure you won’t fire the bolt at an inappropriate time or scenario—that being another time when you didn’t cock the crossbow. If you do that, there’s a chance you will hurt someone, especially if you are hunting together in a group. For that, each crossbow comes with a safety mechanism.

The safety mechanism helps you to block the bolt from leaving prematurely. Some main problems that inexperienced archers tend to face comes with timing the release of the safety and shooting. However, keeping the crossbow on safety is necessary during the hunt. Without the safety, you and your companions would be at serious risk.

Yet, people still tend to keep the crossbows on safety for prolonged periods of time. During those times, it becomes dangerous to have a crossbow at home because it could fire and do damage to others while the archer isn’t present.

That’s because the limits of the crossbows are tested and can lead to breakage that cannot be stopped. Therefore, the best way to prevent such breakage is to learn the limits of your crossbow.

The Limits of the Crossbow

With a bow, you would have to release the bow and move around with it fully drawn. Note that it can be really strenuous to do so, and it’s also highly impractical, which is why crossbows are so popular. With a crossbow, you won’t have to draw it every time you see prey. Then, you can just cock it and prepare it for shooting—once you’re ready, you would then pull the trigger.

However, just because you can keep it cocked doesn’t mean you should do so. A crossbow will break, regardless of whether you take care of or constantly strain it. The strings and the cocking system will tear down in time if you continue to mishandle the weapon.

For a clearer understanding, let’s look at a more concrete situation in which you would have to use the crossbow in such a manner. In thi situation, you would be hunting in the woods.

You are in the woods and the party you are with has been trailing the prey for hours now. You have seen it a few times, so you cock the crossbow and leave it on safety; yet, that deer you are chasing isn’t really showing up.

You are moving on a fresh morning step by step. The wind is there and messing with your coordination, but isn’t hindering your advance completely. You continue walking with the knowledge that the prey is right around the corner. Suddenly, something jumps in the bushes, so you remove the safety and pull the trigger.

You missed, and now you can see that it was just the wind. Not fazed, you put another bolt into the crossbow, draw it, and put it on safety. Looking at the ground you can see the trail is still fresh, so you continue trailing the prey.

The sun is high in the sky, and you can see that you may not be scoring anything today, thus it’s time to go home. As you walk home, you could see that your crossbow is still on safety, fully drawn and ready for shooting.

However, you are walking already, and you don’t want to stop now to adjust it. So, you get home, leaving it as is. You put it in the usual place, do what you do, and go to sleep. In this case, you mishandled the crossbow by leaving it fully drawn often before too, especially during the hunt.

As you are sleeping, there’s a sharp, piercing sound. You run to pick up your crossbow, only to see that the strings are broken and the bolt is hanging from the wall. This potential situation is a major reason why you don’t want to mishandle your crossbow. 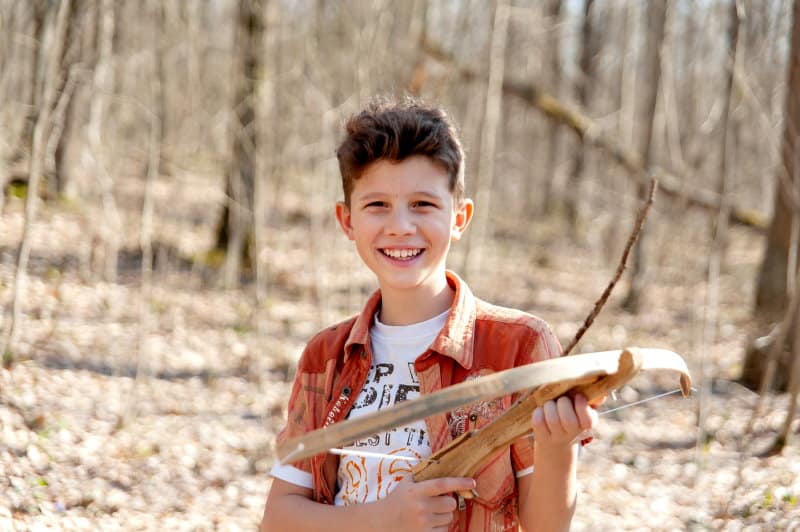 The story outlined in the previous section occurs quite rarely; however, something that always happens when mishandling a weapon often is that it will probably end up breaking. The reason for this is that you are putting unnecessary stress on the weapon if you leave it cocked and drawn for long periods.

There’s no secret behind this—the strings and the cocking system wear down with time, which will happen regardless of what you do. Nothing is built to last eternally, and the crossbow is no exception.

Every time you draw your crossboq, you are bringing it close to its demise. That doesn’t necessarily mean you shouldn’t use it; it just means that the way you handle it will ultimately determine its lifespan.

If you are using it without special care, there will be a higher chance that it will break down more easily. So, you will want to learn how to make your crossbow safe at all times.

Making Your Crossbow Safe at All Times

The only way to make sure that your crossbow won’t fire inappropriately is to learn to control it safely. That includes keeping it on safety at all times when the bolt is loaded and ready for shooting. If the bolt isn’t loaded, you don’t have to turn the safety on.

Then, when the safety is turned on, you will want to shoot only when you are certain that target is in front of you. Once you have a clear shot, pull the trigger and try to hit the target. If you miss, put the crossbow to the ground, with the trigger pointing away from you. Load the bolt, then draw the bow.

When you do that, put the safety on again and prepare for another shot. It’s important that you remove the safety and take the bolt out immediately once the hunt ends. Uncock the crossbow and leave it empty without bolts in the shooting mechanism and the safety on.

After that is done, you are completely safe and out of harm. When you do this, your crossbow will also last a lot longer and be more durable over time. This would be how you handle the bow and remain safe for a long time too.

Remember that regular maintenance is also necessary to keep your crossbow safe. When maintenance is left by the sidelines you end up with a crossbow that shoots the wrong direction. Check out our guides on this:

Have Fun and Remain Safe

As stated in the previous section, when you do all that, you will remain safe during the hunt at all times. Now you can enjoy it fully while evading dangerous possible scenarios in which you hurt yourself or someone else with an unattended crossbow.

Being safe when doing something—such as hunting—is priceless. So, you need to make sure that you unload the crossbow after use. Doing so every time is far better than letting it shoot off without you present to control it.