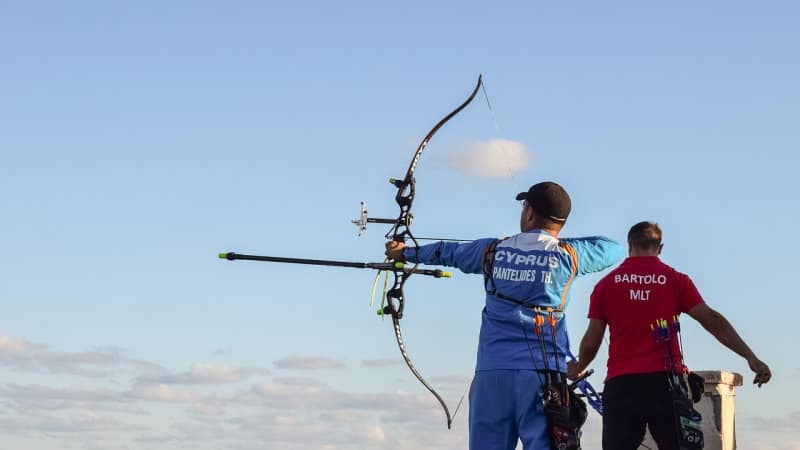 Archery is a beautiful sport to practice. Once you learn how to grip your bow correctly, you feel like you can make your arrows fly as much as you like.

That is true until you start to compete with someone else. There can’t be competition without a set of rules to ensure fairness.

So, what are the rules of archery?

The rules of archery are a few sets of rules to ensure the safety, fairness, and reliability of results between competing archers. These rules start from the type of bows, arrows, and shooting time all the way up to the shooting target, its distance, and its design.

The rules may slightly vary between different types of competitions, so we’ll use the Olympic rules as our benchmark for this article. Let’s get the rules of archery explained. 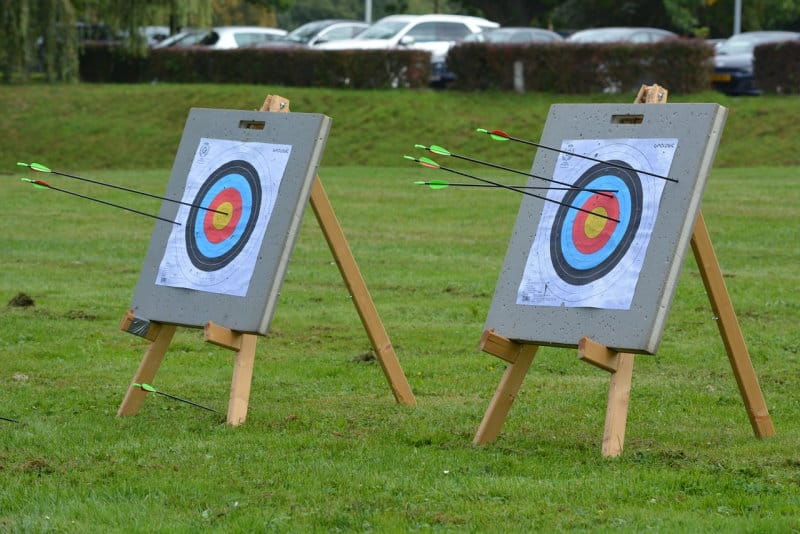 The archery shooting target differs in size based on the competition, but it always has the same design. It consists of 10 rings that get smaller as you approach the center.

They’re numbered ascendingly from the outside to the inside and they have five different colors.

The outer two are called one and two and they are colored white. The following two are black, and then you get blue and red. The last two circles are gold.

In the Olympics. The diameter of the target is 122cm. These targets are quite expensive. Read this article to know why.

We’ll divide our equipment into three categories: the bow, safety equipment, and arrows.

Most competitions are done with compound and recurve bows. In the Olympics, only recurve bows are allowed. See this article if you want to know more about both bows.

There are no restrictions on the bow’s manufacturer, but the bow must have a handle (grip), two limbs, a riser, and a string.

It’s allowed to use sights, clickers, and stabilizers. However, it’s not allowed to have release aids or electronics that connect to the bow.

All sorts of safety equipment are allowed as long as they don’t give an unfair advantage to the shooter. Such equipment includes but isn’t limited to vests, gloves, and glasses.

Equipment like gloves don’t give you an advantage over your opponent but they may enhance your archery experience. Check out this article to understand how.

The arrows could be made from aluminum, fiberglass, or carbon fibers. However, both contestants must be using the same type of arrows.

The maximum arrow shaft diameter shouldn’t exceed 9.3 mm. Also, each competitor should have their name on the arrow for easier identification.

If any equipment is damaged during the competition, the archers can appeal to the judges to have their equipment fixed or replaced. The compensation time is left for the judges to decide.

Archers take turns of 20 seconds in shooting their arrows onto the target. When they’re done shooting, this is called “an end.” 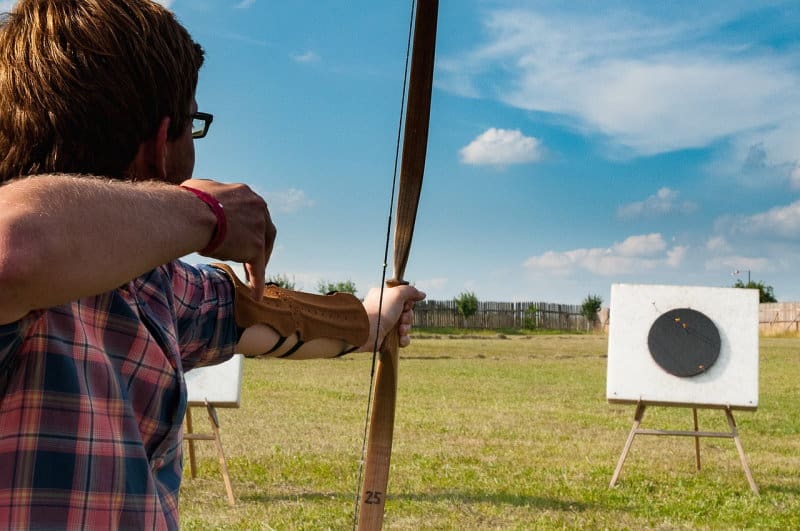 As of April 2010, archery in the Olympics has been using the set system. In the first round, the archers shoot 72 arrows over the course of 12 ends (six arrows per end).

Then comes the elimination rounds where archers shot six arrows over three ends. In the finals, three arrows are shot over five ends.

To beat your opponent, your score must be higher than theirs. To do that, you should get more points than them.

Depending on where the arrow lands, each circle gives you a number of points equivalent to the number given to the circle. For example, if you hit circle three (black), you score three points.

If an arrow lands on a line of a circle, the archer receives the higher value point. For example, if the arrow lands between circle six and circle seven, the archer gets seven points.

If the archer misses the target completely, they get no points, but if the arrow bounces off the target, the archer gets the points depending on the mark made by that arrow.

On rare occasions, if an arrow shoots through another arrow (Robin Hood rule), the archer gets the same amount of points as the arrow they shot through.

If the target falls for whatever reason during shooting, extra time is given to the archer as compensation.

When both archers end up with the same score, they end up having a tie. However, there must be a winner.

In most competitions, the winner will be the archer who scored more arrows inside the inner golden circle. If the number of points is still the same, then the following circle is used.

In the Olympics, the winner is decided by a shoot-off. Both archers are allowed to shoot one arrow and the one who scores closer to the center wins.

Archers are given a time frame depending on how many arrows they will shoot at each end. Each archer is given two minutes for three-arrow ends, and four minutes for six-arrow ends.

The beginning of the given time frame is indicated by whistles. The archers are signaled to move to the shooting line with two whistles.

It’s important for the archers not to shoot any arrows before or after the time frame. Doing so would result in a penalty and the archer would lose the points of their highest scoring arrow.

The last signal consists of four or five whistles and it’s rare to hear. When the archers hear this signal, they have to stop shooting immediately and wait for further instructions.

All archers have to shoot from the same line and have their targets on the same distance and same height.

The distance can vary depending on the competition. In the Olympics outdoor competitions, the target is 70 meters away and 1.3 meters above the ground.

In indoor competitions, the target is much closer at 18.3 meters. It’s also much smaller, with a diameter of 40 centimeters.

There are occasions where the arrow falls or the archer simply misfires. In most cases, archers aren’t allowed to reshoot their arrows, but in a few exceptions, they can shoot their arrows again.

If the arrow falls within the archer’s reach after the misfire, they can pick it up and shoot it again without penalties.

Another scenario where the archer can reshoot their arrow is when they drop it within three meters of their shooting point. In that case, they can still pick it up and shoot it.

These are the basic rules you should know about archery. They might shift a little depending on the type of competition but the foundation remains the same.

These rules will enhance your experience If you’d like to join a competition or simply understand what’s happening while you watch one.

Speaking of competitions, if you ever wondered why archers drop their bows after shooting, check this article to understand why.

Enjoy the sport, and keep practicing!