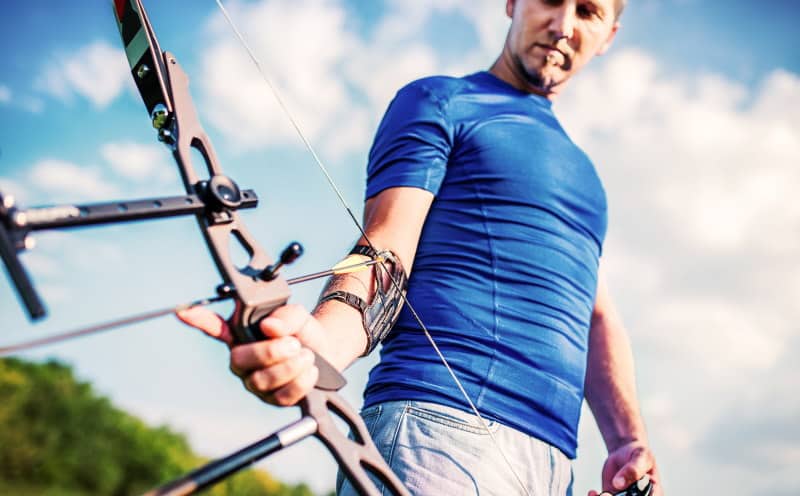 If you’ve ever watched an Olympic archer shoot their bow, then you’ll have noticed that they drop their bow after firing. Because most of these archers have additions to their bow, such as wrist straps to keep the bow from falling, you may have heard of this phenomenon called “swinging” their bows. Both are correct.

But why do they do this?

Archers drop their bows because they’re not actually holding onto them. This might seem counterintuitive to new archers, but it is a way of increasing their accuracy. Because these archers don’t hold their bows, it means they are only keeping them upright because of their grip on the bowstring. When they let go of the bowstring, they are no longer keeping the bow up, and it drops or swings.

Many new archers find this idea to be insane. However, this is because most new archers are actually shooting their bows the wrong way. To learn the proper way to fire and why you don’t want to hold onto your bow, continue reading. We’ll cover this and more.

Bow Drop: Why It Matters If You Want to Be Accurate 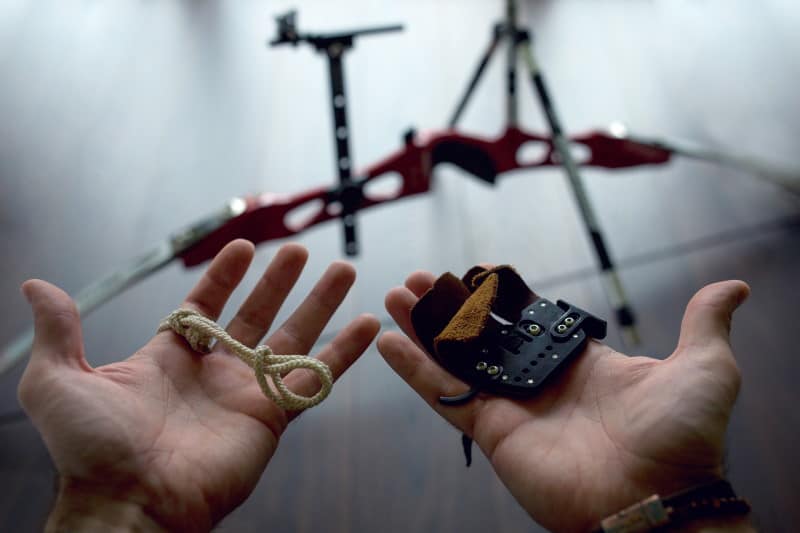 To understand fully why Olympic archers do allow their bow to drop, we need to take a few moments first to discuss the proper way to hold a bow. Most new archers hold their bows in the middle and wrap their fingers around it. In doing so, they gain a tendency to hold onto the bow as tightly as they can.

This is already a big problem. When you are holding the bow this way, you are creating tension in your arm and your hand. As your other hand takes the bowstring and pulls it back, a level of tension enters into the arm. Normally, it is fine for your drawing arm to be tense, but when both arms are this tense, there is a problem.

If you have your bow nearby, try this experiment: Hold onto the center of your bow as tightly as you can and pull the string back. Feel the way your arms start to shake? If you can do so without causing any issues, then nock an arrow while you do this. As you line up a shot, you will notice that the tension in your arms makes it much harder to aim.

Now try holding the bow like an Olympic archer would. Instead of gripping the bow, use your hand to hold it out in front of you, then pull back the bowstring. Before you line up your shot, let go of the bow but not the bowstring. Do not remove your hand—you still need it to keep the arrow lined up properly. Likewise, let it go with your fingers.

If you’ve done this properly, then you’ll notice that the bow doesn’t drop. In fact, you should feel as if it is being pulled into your hand between your thumb and forefinger. This happens because you are holding onto the bowstring. The force and tension you create with the bowstring is trying to pull the bow back to its original position, but your hand is in the way. You aren’t holding the bow anymore, but you are still keeping it lined up and ready for a shot.

When you aim this way, you will notice that the hand holding the bow is much steadier. This is because it is no longer holding onto something, which relieves a great deal of tension. To grip onto something always makes our arms much more shaky, which decreases our accuracy. For Olympic archers who need the highest score possible, accuracy is the most important thing in the world.

We may not be Olympic archers, but we can learn a thing or two from them.

The reason the bow drops when they fire is because the only grip they had was on the bowstring. As the arrow flies out, the bow naturally falls. An addition you can buy for your bow—called a sling—keeps it in place so the bow doesn’t fall to the ground, risking damage.

While this is the main reason that archers drop their bows, there is actually a second benefit to this occurring. Swinging the bow forward helps to get the bow out of the way of the arrow. As the arrow takes off, it will wobble a bit. This can’t be avoided, which we speak about here:

When the arrow is wobbling, there is a chance that it could bump into the bow and be sent off target. Swinging the bow is one way of creating a better follow through after shooting. The bow drops out of the arrow’s way, which greatly reduces the chance that it catches the arrow and veers it off course.

So, Olympic archers drop their bow primarily because they aren’t holding their bows, but secondly because it is a form of follow through that makes for more accurate shots. You can see this strategy in action in this video:

My Bow Didn’t Come With a Sling, Have Any Suggestions?

There are tons of options available for slings that you can purchase, but you will need to be careful. Beginners who don’t know much could head to Amazon to purchase a sling and buy the wrong item. There are many carrying bags that can pop up when searching for slings.

A proper sling will go a long way toward helping you get a sense of how to shoot more accurately. This should be considered a temporary product, as it is very easy for a sling to wear down with use. Always keep an eye on yours for wear and tear and replace it before it breaks.

No, not really. Compound bows are designed differently. Those firing longbows or recurve bows will pretty much always follow through their shots by letting the bow drop. As mentioned above, this helps keep the bow out of the arrows way and increases accuracy.

Dropping the bow is also the natural flow of body movement for a longbow or recurve shooter to follow. They would allow their muscles to follow the path they would want to take naturally, so the shooter doesn’t injure themselves by trying to go against body physics.

Compound bows shoot much, much faster. The arrow can leave a compound bow at nearly twice the speed it leaves a longbow or recurve bow. This means that the arrow is long gone by the time the bow would drop.

Are There Different Types of Slings?

There are two types of slings that are most commonly used, making up about 95% of all slings in use. The other 5% are slings that have been custom-made to individuals’ unique needs and desires.

A finger sling is a type of sling connected to one’s pointer finger and often one’s thumb as well. When you let go of the bowstring, the bow starts to drop forward. Those with quick reflexes can grab the bow as it begins its forward tip. Likewise, a finger sling can make this process even easier because it limits the distance the bow can move away from your hand and prevents it from dropping to the ground.

A wrist sling has the same effect as a finger sling, but it wraps around the wrist rather than around your fingers. Both these types of slings have pros and cons, so it is up to you to balance that which is best for you.

If you want to see these in action and learn more about how finger and wrist slings function, then check out this informative video:

As you’ve now seen, Olympic archers let their bows drop because they aren’t holding onto them. This may be a radical realization for those who grip onto their bows with all their might, but is doing so really necessary?

No, it isn’t necessary to drop your bow, especially if you are a compound archer because it’s downright useless for compound bows. However, if you are using a longbow or a recurve bow, then it is in your best interest to purchase a sling and start improving your form.

It may feel weird to let your bow drop at first, but the improvement in accuracy you’ll see as a direct result will speak for itself. Get out there and start leveling up your archery skill!