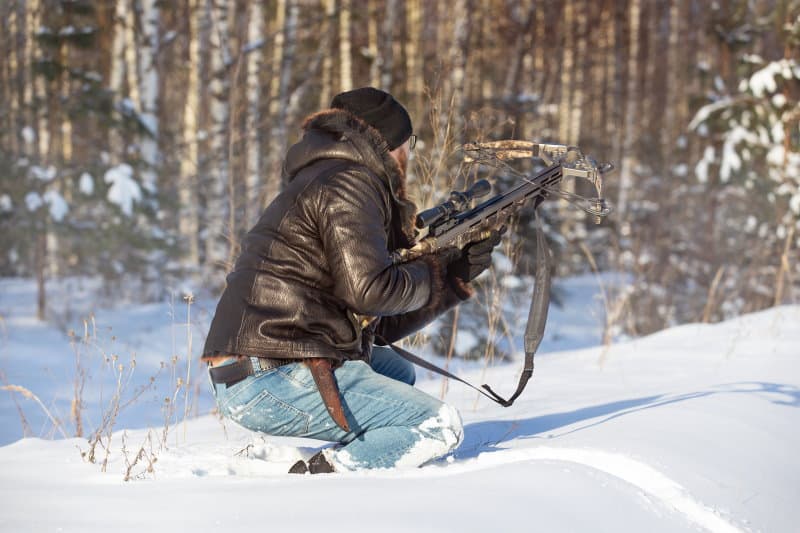 Crossbows have been in use for a long time. They’ve changed considerably over the years, but the overall design remains the same. One question that anyone interested in hunting asks is, “How much do crossbows weigh?”

On average, bare-bones crossbows weigh seven pounds. Yet, because crossbows come with added attachments, they can weigh up to 15 pounds. There are lighter crossbows that weigh under five pounds, but in order to weigh so little, these light crossbows sacrifice some of their functionality.

A variety of factors determine how heavy a crossbow is. That weight, whether light or heavy, can affect the crossbow’s portability and accuracy. What’s more, it’s essential to consider a crossbow’s draw weight along with its weight.

In this article, we go over these points, so stick around!

How Heavy Is a Crossbow?

Most modern crossbows weigh somewhere between five to nine pounds without their attachments. After they’re outfitted with necessary and extra accessories, this weight can increase by about two or more pounds.

This means that fully equipped crossbows can weigh from nine to thirteen pounds.

Still, modern crossbow manufacturers have been working on decreasing overall crossbow weight. Over a decade ago, crossbows used to carry more weight—even though they weren’t as efficient as today’s crossbows.

Nowadays, there are crossbows that are designed to be lightweight without sacrificing efficient functionality, and they shoot arrows quickly and powerfully.

How Heavy Are Crossbow Attachments?

Most often, hunters use specific attachments to ensure they hunt successfully. These attachments add to the overall weight of the crossbow.

There are about five attachments that are a must-have for a crossbow, with each one weighing from a few ounces to several pounds.

While this weight range may not seem like much, when combined with a crossbow, these attachments can significantly increase the crossbow’s weight. 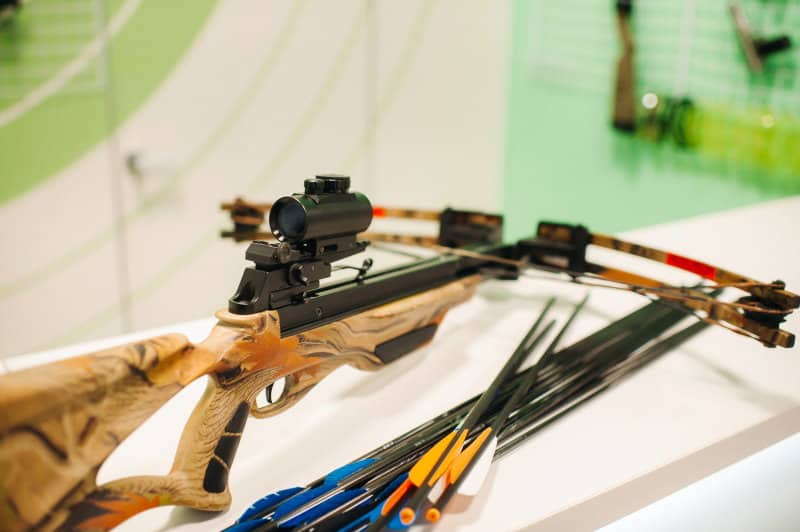 The scope is possibly the heaviest yet most essential accessory you can put on your crossbow. This attachment does a lot more than just improve accuracy. It also gives you a wider and further view of the area, allowing you to see your target more quickly and clearly.

Scopes range in weight from a few ounces to more than three pounds. Most scopes on the market weigh around one to two pounds, but scopes that weigh three-plus pounds are prevalent as well.

Some hunters forgo the scope and shoot instinctively. You might even consider doing without the scope to lighten the load on your crossbow. Most hunters, however, prefer to use a scope while hunting and even recommend it.

You can use a scope or a bore-sighted scope depending on your preferences since both weigh about the same.

The quiver is essentially the arrow holder. It’s extremely useful for quick reloading. You simply store your arrows, bolts, or quarrels in the quiver until the time comes to load or reload your crossbow.

The accessory weighs only a few ounces by itself, but when combined with the weight of the arrows, it can weigh more than a pound. Compound arrows, for example, tend to be heavier than recurve arrows.

Quivers come in a variety of shapes and sizes, and some are even designed to be worn by the shooter rather than attached to a crossbow.

Those quivers that are attached to the shooter can be more convenient for hunters who want to reduce the weight of their crossbows.

Limb dampeners are devices that reduce the noise and vibration that result from shooting a crossbow.

A dampener weighs between one and two ounces, which isn’t much. Most hunters and shooters, however, use more than one limbsaver dampener. You may even attach up to four dampeners depending on the length of the crossbow.

These attachments are necessary because they reduce the amount of pain and fatigue that a shooter may experience during normal shot cycles. They also protect the crossbow’s string.

The crossbow sling is an accessory that allows you to carry the bow on your back.

Just like other attachments, the crossbow sling adds some weight to the crossbow. The heaviest slings are slightly less than a pound.

That said, the sling can relieve your arms from the fatigue of having to carry the bow the entire time.

A cocking device is a winch that allows you to cock any crossbow, regardless of draw weight.

Most hunters recommend using a cocking device even if you can cock your crossbow yourself. This device is especially crucial for high-powered crossbows.

Nevertheless, to prevent any mishaps, make sure that your cocking device is stable.

Is a Crossbow’s Accuracy Affected by Its Weight? 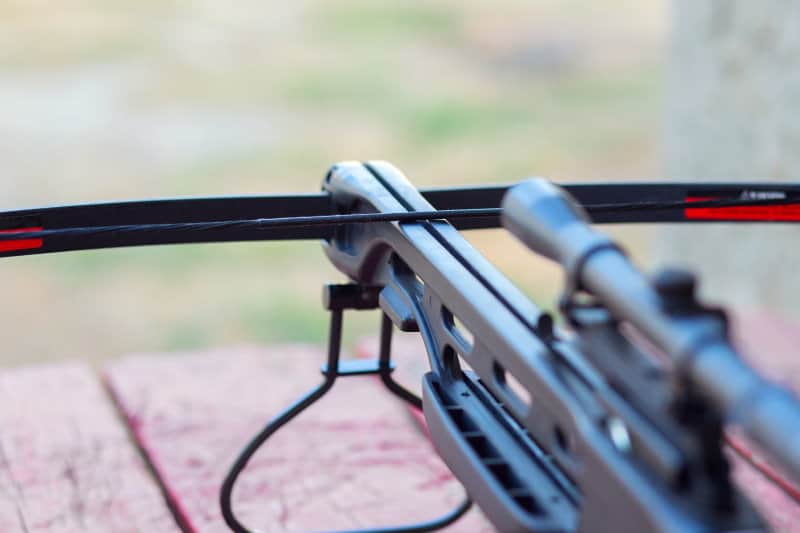 Shooting a heavy crossbow can be physically demanding.

When you lift your crossbow to aim at your target, you’re forcing your muscle to fight gravity as you stabilize your shot. Eventually, your arms will tire out, making it more difficult to shoot perfectly every time.

That’s why it’s important to take precautions to prevent arm muscle fatigue since it can decrease your accuracy.

The first thing that you should do to prevent fatigue when using a crossbow is to buy a crossbow sling. The sling will carry your bow when you’re not using it, which can significantly lessen fatigue on your arm muscles.

Another thing you could do is exercise your arm muscles. Working out your arms can give those muscles more stamina, which can lengthen the time it takes for your arms to tire.

That said, a crossbow’s weight isn’t the only factor that affects its accuracy. The draw weight of a crossbow is equally, if not more, crucial to the accuracy of your aim.

What Is Crossbow Draw Weight?

A crossbow draw weight is the amount of energy you use to pull the crossbow string back. Pulling the string back on a crossbow with a draw weight of 200 pounds, for example, would be as difficult as lifting a 200-pound dumbbell from the ground. 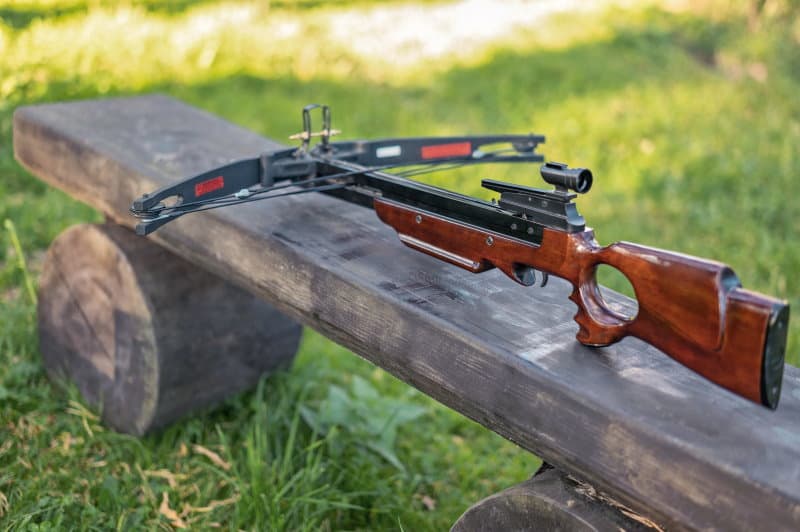 When you draw the crossbow string, the energy it takes you to pull is stored in the string. So, when you pull the trigger, the stored energy becomes the driving force that propels the arrows or bolts forward.

An increased draw weight boosts arrow speed, reducing the effects of wind resistance and other variables.

That said, having a crossbow with a high draw weight can exhaust your arm muscles quickly. After drawing the string back a couple of times, your arms may become shaky and fatigued, which can affect your accuracy.

More than that, a high draw weight increases the vibration that passes through your crossbow. This can loosen the crossbow’s components, which, in turn, may reduce your accuracy.

How much do crossbows weigh?

It’s a fair question to ask because a crossbow’s weight can make or break your hunting experience. It has an effect on the amount of energy you exert lifting it as well as your shooting accuracy.

While there’s some leeway with removing some accessories, no well-functioning crossbow can do without some necessary attachments.

Luckily, manufacturers continue to look for ways to decrease the weight of crossbows while maintaining their efficiency. Still, this isn’t the only reason crossbows are so expensive. Read more here to learn about the other factors that contribute to the costly price of crossbows.