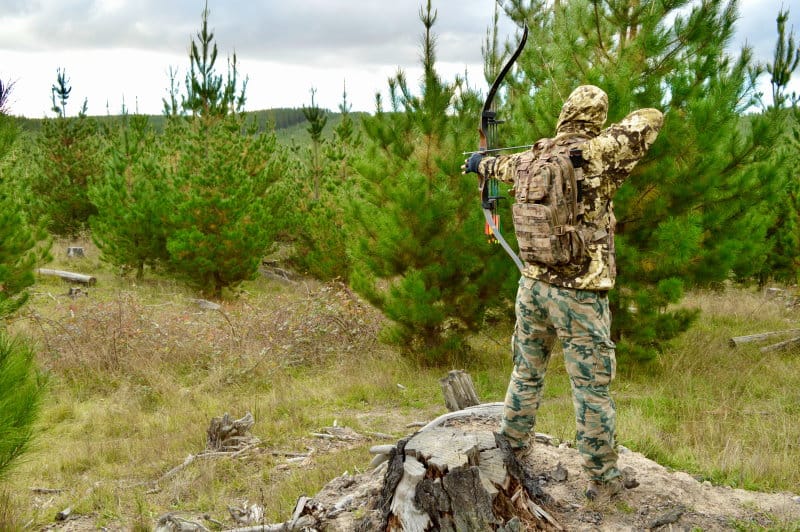 This history of using the bow for hunting is as old as humans themselves. Historical artifacts show that early humans used the bow as early as 10,000 B.C. to hunt animals for food and defend their territories in warfare. As a matter of fact, bows and arrows were popular in several ancient cultures like the Chinese, Ancient Egyptian, and Roman civilizations.

Today, hunting animals using a bow and arrow is still common, although people practice it as a recreational activity. You can still enjoy and eat the game animal you hunt, but today bowhunting is governed by a set of rules and regulations that aim at preserving the populations of game animals and guaranteeing the safety of hunters, animals, and the hunting lands.

What animals do people hunt with a bow?

Bowhunters have plenty of options regarding the game animals they target, the archery equipment they use, and the time they pick for planning and going on hunting trips. In the US, there are 29 game animal species that you can hunt using a bow and arrow. But not all of them are that common.

The most common game animals that you can hunt with a bow include the white-tailed deer or whitetail, mule deer, Columbia black-tailed deer, Rocky Mountain elk, Roosevelt elk, barren-ground caribou, black bear, bison, and pronghorn.

In addition to these big game animal species, hunters can literally target any animal that can be hunted using a firearm. This includes smaller animals like feral pigs, feral goats, rabbits, hares, and game birds.

These animal species are quite common in North America, so you’ll probably encounter one of them if you’re interested in bowhunting. 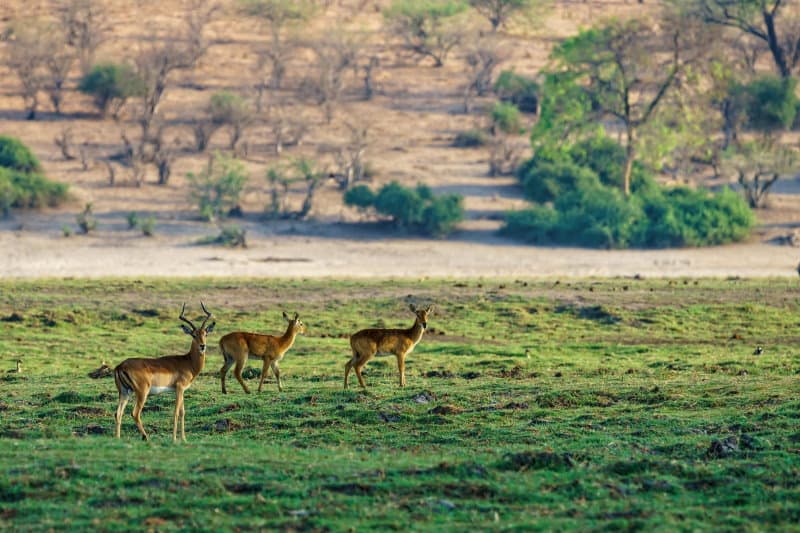 Also commonly known as the whitetail, the white-tailed deer is probably one of the most common and easiest game animals that you can target. Whitetails are popular because they’re found in almost every American state and can survive in various habitats.

This is why you’re likely to encounter one while you’re going bowhunting, even if this is not the game animal you’re looking for.

Despite being common targets, whitetails are never easy to target because they have a strong sense of smell and sharp eyesight that enable them to detect the presence of a hunter. Hunting whitetails is a challenge that bowhunters love because it helps them improve and master their craft.

The mule deer are usually found in the same habitats where the whitetail deer is present. This is why it’s another common game animal that you can target as a beginner bowhunter.

Hunters target mule deer because the animal is slightly larger than a whitetail. If you’re hunting for meat, you can get more meat from a mule deer, although the meat has a stronger taste. Other differences include the size of the ears and the shape of the antlers.

The Columbia black-tailed deer is the favorite game animal of the West Coast hunters. It is a lot smaller than a mule deer and has a black tail instead of a white one like the whitetail deer. It also has smaller antlers.

The meat has a mild flavor, especially if you’re targeting a smaller animal. In general, the herds of the Columbia black-tailed deer can often be confused with the herds of the mule deer because animals look a lot alike. 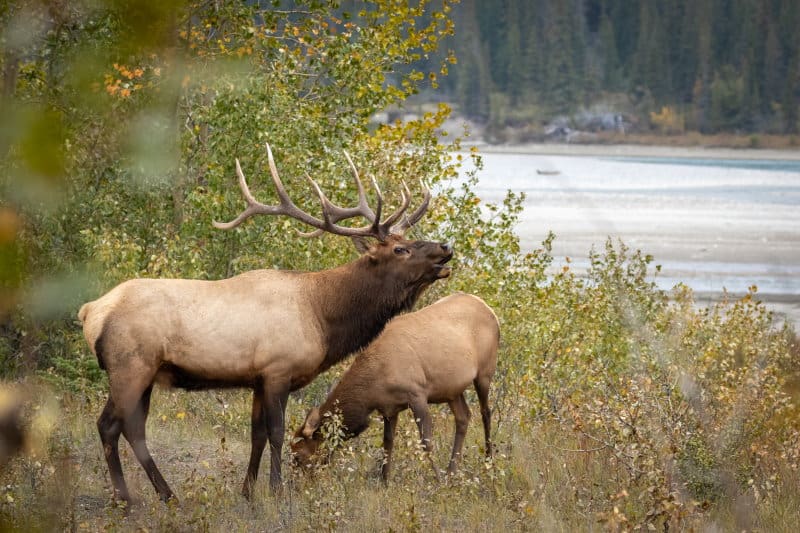 Elks are larger than deer, but they’re still among the most prized animals by bowhunters in the Western and Eastern states. The Rocky Mountain elk is a large animal that can weigh up to 900 pounds. However, other subspecies can even be bigger.

This animal is quite aggressive, which makes it more challenging to hunt. It also has larger antlers that many hunters value. This is why elk hunting is more suitable for experienced bowhunters who don’t mind spending a long time luring the elk close enough to get into the arrow’s range.

The Roosevelt elk is probably one of the most difficult animals to hunt using a bow and arrow, mainly because it lives in the thickest forest habitats in North America. If you live in Oregon or Washington, you have a chance to encounter this massive animal, as bulls can weigh up to 1000 pounds.

This animal isn’t that vocal, and unlike other elks, isn’t easily lured with calls. This is why stalking and waiting for hours are quite common if this is the animal you wish to hunt.

The barren-ground caribou is a common game animal in Canada and Alaska. An animal can weigh up to 400 pounds, and a herd is usually made of 100,000 individuals, which makes it an interesting target for bowhunters.

Unlike deer, both the male and female animals grow antlers. In addition, these animals have hairy hooves that give them a good grip when they’re walking in the mud or snow.

The migratory season of the caribou starts when winter approaches, and the herds gather to form larger groups looking for food.

The black bear is one of the most adaptable bear species that can be found in 35 American states, Canada, and parts of Mexico.

Hunting the black bear was quite common in the past, as the beasts were prized for their meat and warm fur. However, in modern times, bowhunters still target black bears because of their strength, as they can show the experience and strength of a hunter.

This is why some states offer several bear hunting seasons to attract hunters who want to target this majestic animal. 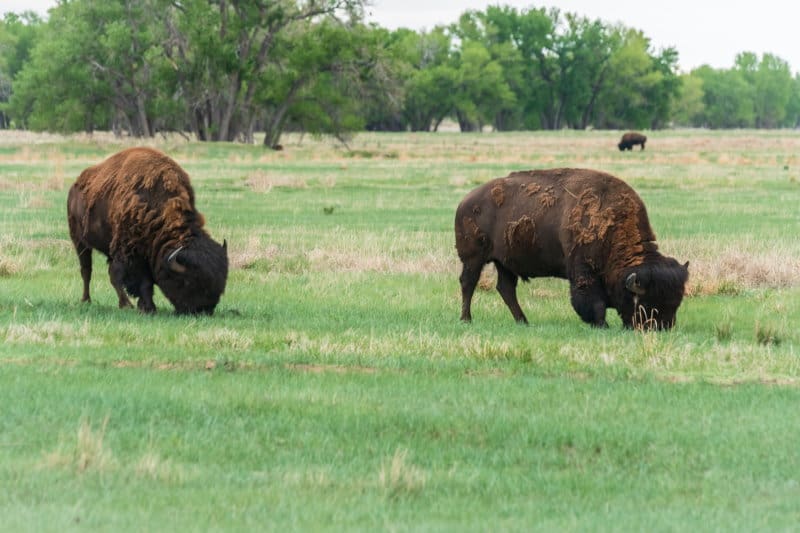 The bison is the largest land animal in North America as it can weigh up to 2,000 pounds, and it has been hunted since the times of Native Americans.

As a matter of fact, due to the popularity of the hides, the American bison were hunted to almost extinction in the 19th century.

However, restoration efforts were successful, and today more animals can be found in different parts of the US.

The bison’s meat is very much like beef, but it tastes a little sweeter. It doesn’t have a strong gamey odor like the meat of other animals like the moose.

This speed goat can sprint up to 60 miles per hour. This is why stalking and following a pronghorn can be challenging even for the most experienced hunters. In most cases, extreme stealth or even a decoy are required to guarantee the success of your bowhunting experience.

Pronghorns are found in the Western states of the US, and the animal is smaller than most American deer, as males can weigh between 100 and 140 pounds. Bowhunting the pronghorn isn’t for beginner bowhunters because these animals have incredible eyesight and can detect the slightest movement from a great distance.

Is bowhunting worth it?

Bowhunting is totally worth it if you can master your skills. It takes time, devotion, and practice to be able to shoot an arrow right to the animal’s heart instead of hitting the head where the arrow can deflect or any other part of the body. In this case, the shot can hurt the animal, but it will still run away.

For best results, you need to make sure that you’re properly equipped and prepared before going on your next bowhunting adventure. Hunting with more experienced bowhunters can also increase the success rate of your hunting trip.

Any animal that can be shot using a firearm can also be hunted using a bow and arrow. However, there are several game species that hunters prefer because hunting them is more rewarding.

Some of these animals are typically easier to target than others. You can learn more about hunting tips and tricks by checking out this article.